Ultrasound results and my feelings on it

I am sure most of you know about this by now, because I am pretty my readership is mostly family, and if you aren't family, we are probably friends on facebook, but we had our ultrasound last week. It was actually supposed to be on May 4th but my ob/gyn office called me that morning because their tech called in "injured" and they had to reschedule their appointments. The next opening they had in their office was 4 weeks later! 4 weeks, they seriously wanted me to wait a whole 'nother month to find out what that little baby is, I think not! So they got me a referral to Imaging at Renown Hospital for the following Wednesday at 8:15 in the morning with an appointment arrival time of 7:45! I am so not a morning person and I couldn't take Simon to the appointment so had to get him to Cindy's before that. Thank goodness I have good family, Mel and Jared came and got Simon on their way to drop off Phin, and took him too, so luckily I didn't have to get up even earlier and drop him off in Spanish Springs before my appointment. 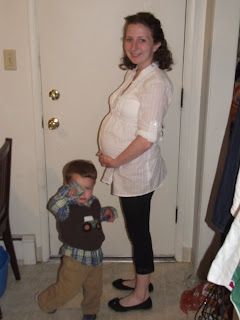 So ultrasound day, I get to appointment a few minutes late (of course, we are late to everything) and they are doing remodelling on the floor where my appointment was, so where I had to go to check in wasn't even on the same floor as the ultrasound itself. Steve was supposed to get off at 8, and rushed over to my appointment, and because of the remodelling had to go on a bit of a wild goose chase to find someone who could take him to where I was, he got there a few minutes after the tech had already started checking things out.
The baby cooperated pretty well for the appointment. Part way through it flipped over though and had it's back facing out, so I commented that it would make it harder to tell what the sex was, then the tech told us he knew already, as soon as he started he did a quick scan over my whole uterus and saw right away what the sex was. He also said he wasn't going to tell us unless he was 100% sure of what it was, if it wasn't definite he didn't want to show us and then be wrong. He was a funny guy though, he joked how bad did we want to know the sex and how much cash we had on us to find out, then proceeded to show us our little boy! Very much a boy, parts were very prominent and definite, no mistaking what they were. The tech did lots of measuring and scanning, making sure things were symmetrical and where they should be, we got to see all 4 chambers of the heart working like they should, cute tiny little toes and hand waving around, it was really cool.
But when he told us boy, Steve and I were both kinda like "huh, really, a boy?" We were both pretty sure it was going to be a girl or at least maybe we were convinced because we wanted one so bad, and so did all of our family, we all thought it was going to be a girl, so boy came as a shock and is taking me some time to adjust to, but I am almost there now. Another boy will be a lot of fun, I love my Simon and they can be buddies and share a room, and no teenage girl drama right? Right? I'll be okay with another boy. I just don't get to go out and buy all those cute girl clothes, no pink and purple, and flowers and ribbons and bows, no cute dresses and tutus. But I guess that also means I don't have to learn to do girl hair and fight with her about combing her hair and girly attitude. I also don't get to spend tons of money to buy all the stuff I had planned for her room, we have a lot of cute stuff at my work that I kept saying, I'm going to buy that for my daughters room, it was going to be cute. Shabby chic owls, and birds, and outdoorsy animal kinds of stuff. Birdcages and antiqued furniture, and a bit Victorian feeling, oh Lucy's room was going to be so cute! I will survive, it was just a little sad at first, but I am already almost over it. Almost.

Posted by Kari and Steve at 4:19 PM 3 comments Links to this post

Lately, I have been trying to eat healthy and try new recipes and all that kind of stuff. And with Steve's new iPhone and the crashing of our computers, I have gotten to put new apps on his phone. One of my favorites is Spark recipes (which has a website too), and it is mostly healthy recipes. I used two recipes that I liked to make my own recipe and then made some other adjustments too. The ones I used were Grandma's Awful Waffles and Honey Flaxseed Whole Wheat Applesauce Waffles. I liked the base of the Grandma ones, but I also liked the idea of adding in Flaxseed meal for some extra fiber, and applesauce instead of using butter or oil. And then I added some personal things like extra cinnamon and vanilla! The first time I made it I only measured some things, and then afterwards decided to write a recipe for it, so the next time I made them I followed my recipe amounts exactly to make sure it tasted alright and that my guesses for amounts were okay. Such as the first time after my first waffle I decided it needed sugar, so I just threw in a handful of sugar, not really a good measurement for telling other people how to make it. Anyways, we love it, they are very filling, and they are going to my standard waffle recipe, they aren't boring like other waffles. Here is my recipe.

Kari's Awesome Waffles
Yield 7 waffles (7 being both sides of the waffle iron, or 14 square ones if you want to count it that way)

Mix all dry ingredients (except nuts), make a well in the middle for wet ones to go into. In seperate bowl beat eggs, add milk. Pour into well in dry ingredients and mix well. Stir until smooth, also add the applesauce now. Stir in blueberries and walnuts. Use with waffle iron or as pancakes.

When I made these I used the Del Monte fruit Naturals blueberries that are in little plastic containers in juice in the salad section at the grocery store. I saved the juice from them and used it with mapleine to make fruit syrup. Just use the juice to replace the water in the recipe and follow the direction on the box for the quick method. It was really yummy though I was scared to taste it at first because it smelled like cough syrup!
Another note- it may sound like a lot of cinnamon and vanilla, but we love both of these in our family, and the cinnamon gives it some great flavor, if you are scared to use that much, then don't, you are the one eating, it needs to be to your liking too!

Posted by Kari and Steve at 3:48 PM 1 comments Links to this post