There are two new posts below so read them both!

Posted by Kari and Steve at 1:04 AM 1 comments Links to this post

Sorry for new posts in a long time, I have been spending most of my free time either playing with Simon (he is so incredibly fun and the most beautiful boy ever) or painting! I have been painting a lot and loving it. I did one for Simon's room (see it below) a series of three abstracts, then I started one for a coworker but decided I like it and am keeping it for myself, and now a series of two or three huge abstracts for our living room wall (2 or 3 depending on how big they look on our wall and if I run out of inspiration after just 2). The one for Simon's room I used 2 different size cars, a monster truck with nice tread on the tires and matchbox car with tread on the tires (surprisingly hard to find, most of them have flat wheels). I dipped the wheels in paint and drove them all over the boards. This one took for freaking ever because the type of paint I was using took a long time to dry and the tires had to be redipped almost constantly. But it was fun to do, I like the way they turned out, and I like how they look on Simon's wall.
I have also been on a home decorating kick as of late thanks to our recent cable acquisition and a few HGTV shows for free OnDemand. I bought some new bright +-orange throw pillows, and orange picture frame and orange flowers to put in the cool red vase I got from my sister Heather for Christmas two year ago, and an area rug that is brown with green leaves. The living room canvas I have started on is a mostly red textured background and I am going to put a green leafy pattern on it, the next canvas will probably be blue, and the third one... I'm not sure yet...but all have leafy patterns on them.

Talk to you soon! or not, I might just be having too much fun in the real world to spend my time online.
Updates on Simon: I hate my pediatrician, Simon is a tiny boy but I think he has awesome mechanical skills, he is a terrific climber, is incredibly affectionate and cuddly, is a total night owl (he's awake right now playing in the living room) and just is so much fun. He throws balls back and forth, plays fetch (like a dog he picks up the ball puts it in his mouth and carries it to us, we didn't teach him to do it, I think maybe he learned from Eliza-liz), he says UH-oh,dada, mama (sometimes) ouch, bird, ball, boo, hot, no (but only repeats it doesn't use it on his own.. yet), and other words I can't think of right now. Oh and did I say he is a good climber? Really good. like time to bolt furniture down to the ground, climbs on top of everything, can get on the couch even though it's taller than him (he lifts one lg up above his head puts it on the couch and then shimmies himself up onto the couch, it is amazing because he is so short. Anyways, I really need to get him to bed and he is hitting a 3 inch bell around the floor with his stick horse and it is really loud and starting to get annoying... 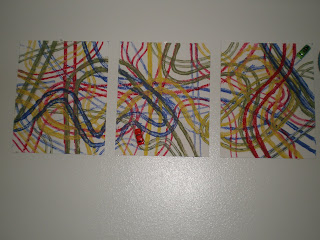 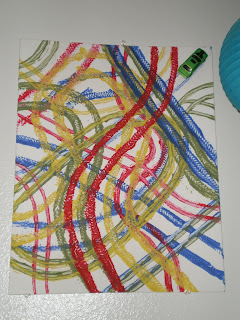 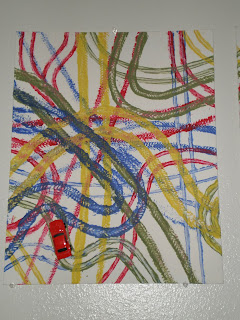 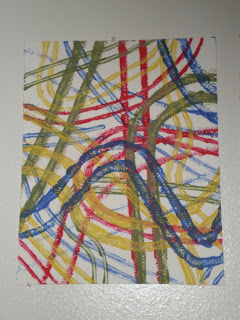 this one also has a car on it, but simon ripped it off the painting right before we hung them up and so I had to glue it back on after we took the pictures.

Posted by Kari and Steve at 12:04 AM 5 comments Links to this post

Simon was sick again. We are pretty sure it was Rotavirus again. Same symptoms. I stayed home with him Thursday because he had vomiting and diarrhea. Friday morning I woke up and threw up the previous nights dinner and also had vomiting and diarrhea all day long. Saturday we all slept in until noon. Woke up, I was feeling mostly better, just needed to eat, and Simon was doing better until about 4 when the diarrhea started up again. Sunday he has been good. It was not fun at all and Simon puked all over the new area rug I had just bought for our living room and so now it smells like vomit, so we are going to have to get it cleaned. Bummer. We are all doing better, mostly, Simon hasn't had much of an appetite today, but hasn't been puking and his BM are starting to firm up.
I really wish we had gotten the rotavirus vaccine when he was born, it would have saved us a lot of grief and worry and money. I didn't even realize there was a rotavirus vaccine until I was at my sisters back in January and read an article about it in a magazine that they had. I was pretty bitter because Simon's miserable and almost deathly experience with it back on Halloween night oculd hav prevented with a simple vaccine. Luckily we didn't have to take him to the hospital this time, just kept filling him up with Pedialyte and tried our hardest to keep it under control and keep enough fluids in him that we didn't have to go to the hopsital. Oh and it helps that with each time a kid gets it their immunity builds up a little more each time, so maybe by the time he is 5 he won't be symptomatic anymore. Let's hope.
Anyways, I really wish we had known about this vaccine when Simon was born and that he had gotten vaccinated for it. The AAP recommends it and there is a lot of helpful info about it on the CDC website. If you are wary about vaccines, don't be afraid of this one, there is also a link to the scientific research study on the vaccine that should ease any vaccine-related fears you may have for this one in particular. Our next kid is definitely getting the Rotavirus vaccine.
http://www.cdc.gov/vaccines/vpd-vac/rotavirus/default.htm

Posted by Kari and Steve at 11:50 PM 4 comments Links to this post