Last night I started to post the picture and video of Simon rolling, but it wouldn't download, so I finally got it to work today. It shows that I posted it last night, because that's when I started working on it. I hate that about blogger, they put the time you start working on a post as the time it is published instead of the time you actually publish. For that reason no one ever saw my Christmas pictures, but they are down there. Here are some pictures of Simon in no particular order. 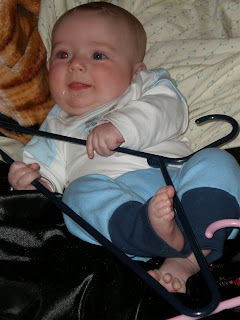 Simon helping me with laundry 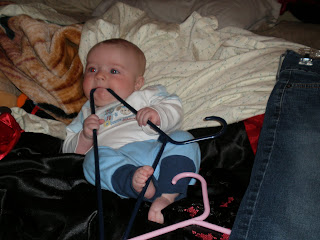 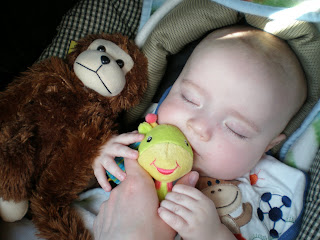 Sleeping in the car, holding my hand, and chewing on his giraffe. 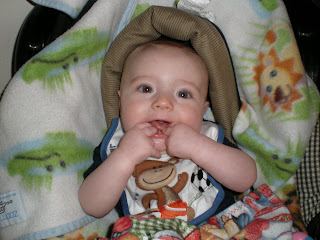 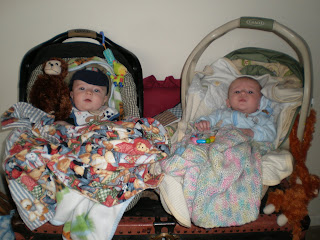 Simon on the left, Zane on the right. Cousins just hanging out in their carseats. 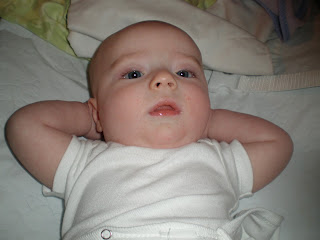 Just hanging out gtting his diaper changed. He did this all by himself, no posing involved! 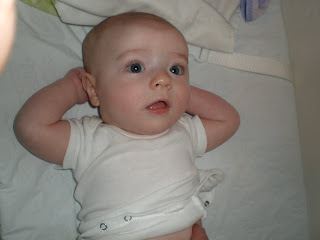 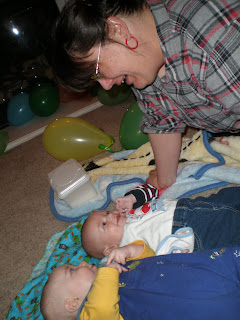 Vovo playing with her grandsons. Simon is the lower one, Zane in the middle. 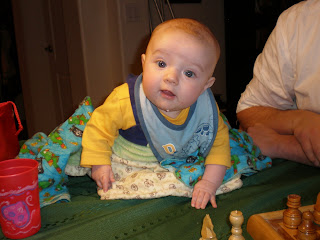 The men playing chess, Simon seemed so interested in the game. 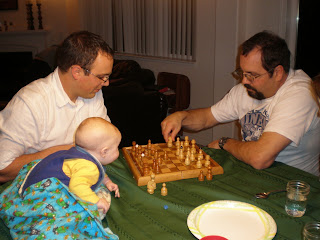 Posted by Kari and Steve at 6:47 PM 5 comments Links to this post

Sp immediately after I posted that last blog, I took Simon over to the blanket for some tummy time, I reached behind me to grab the camera from the computer desk and before I could get it turned on, Simon rolled over! I turned him back on his tummy while I turned on the camera and didn't get it on fast enough for him to roll over again! 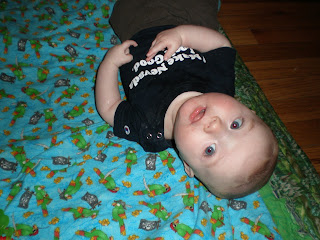 I got this picture, took a break, changed his diaper and then went back to the blanket, turned the camera on first, and got him doing this! 5 times so far today!!

Posted by Kari and Steve at 8:41 PM 2 comments Links to this post

Yes, believe it or not, I am finally updating my blog! So what is new you ask?? Just a few things... Last week we skipped church Sunday, it snowed Monday, Simon had the flu Tuesday and Wednesday, Steve had midterms, Steve started his second job on Monday, we all got very little sleep, I missed out on 5 hours of work, and in good news Saturday Steve found out he got accepted into the nursing program.
So Sunday we were bad and skipped church. It was stake conference, a broadcast from Salt Lake with President Monson and Elder Bednar speaking. It was a wonderful, relaxing day. All three of us slept in late, I cooked us breakfast and then we went on a nice walk, borrowed Eliza from Mel and Jared, and went down to the river. The rest of the day we just hung out around the house and relaxed. If we hadn't had such a relaxing Sunday we probably would have killed each other or our selves later on in the week.
So Steve started a second job on top of school and the 20 hours he works for Comfort Keepers. He was hired to work Monday, Wednesday, Friday from 6 pm to midnight. Last week he worked Monday, Wednesday, Thursday, Friday, and Saturday. They were nice and gave him yesterday off, right? Wrong, he went in today to get his check and they told him he has to work tonight. That sucks. Alot. On top of that he stayed home most of Tuesday and Wednesday with Simon because Simon had the flu and couldn't go to daycare. So his new job is at a place called "The Perfect Donut" and he makes donuts.
Steve got accepted into nursing school at UNR!! he is now a nursing student officially!!
and in other news Simon rolled over today for the first time, twice! We didn't actually see it because he did it at daycare, but it is really exciting for us!
I am getting sick of typing with one hand.

Posted by Kari and Steve at 7:42 PM 3 comments Links to this post