Trip to the ER 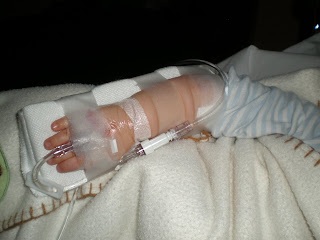 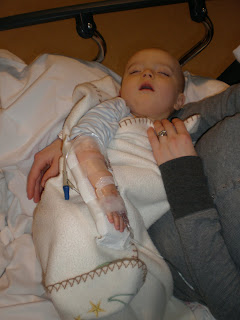 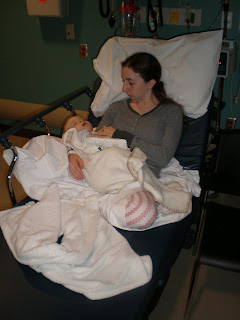 Early this morning Steve and I took Simon to the ER. He had been sick throwing up and having bad diarrhea since Thursday night. I weighed Simon when we were at Steve's parents for trick-or-treating and he weighed 17.8. On our way to load him up into the car he threw up. Then we we got home we went to sleep and I had Simon in bed with me because he has been so sick. In the middle of the night he woke up crying, so I rolled him over onto my chest and he started vomiting. So after throwing up on me three times and having a lot more vomit come out of him than Steve and I thought was possible, we took him to the hospital at like three in the morning. (But first I took a shower because my chest, neck, back, and hair were all soaked in vomit.) Yuck! We were seen immediately and they weighed Simon who was now down to17.6 lbs. (On a side note at Simon's 9 month check-up, nearly three months ago he weighed about 19 lbs I think, so he has lost a LOT of weight.) So, long story short. Turns out Simon is severely dehydrated, they hook him up to an IV, get some fluids in him, find out he has rotavirus, and he will probably be sick for another week. We have to take it easy on everything. Stuffing him not-quite-full of fluids (if he gets full it makes him vomit, so I can't nurse him for as long as I normally do, or nurse him to sleep or he will throw it all up). And it means changing a TON of nasty diapers. Luckily my parents are here to help me with him. Because he is so miserable and not feeling good he just screams if you put him down. And he is contagious so I can't take him to day care tomorrow and I already called in sick to work on Friday because both of us were sick. Once again, very grateful my parents are here because they are going to watch him tomorrow for Steve and I. It is going to be a rough week, but everything will be okay. We just gotta keep him hydrated. 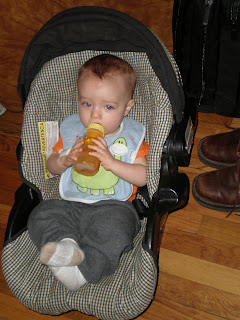 This last picture was taken this evening, he is already doing better.

Posted by Kari and Steve at 8:10 PM 4 comments Links to this post